Business Systems: I love It When a Plan Comes Together!

Colonel John "Hannibal" Smith is a fictional television and movie character and one of four ex-Army Special Forces. Near the end of the Vietnam War, the four soldiers were convicted of a crime they did not commit and managed to escape from the military police. As fugitives, this group, known as the A-Team, worked as soldiers of fortune, using their military training to fight oppression or injustice.

Hannibal, the oldest and most experienced of the group, frequently came up with a strategic plan to accomplish the team’s objectives and win the day. At each moment of victory, Hannibal was heard to say, “I love it when a plan comes together.“

There’s a Plan in Everything

I, too, love it when a plan comes together. Every time I complete a business system or process that performs as expected, I feel exhilarated, and a great sense of accomplishment.  You can, too!

And we’re not necessarily talking about big plans (BHAGS). Small improvements carried out each day have a significant cumulative effect. Below is an example of a quick little plan or system created by a client during the busy holiday season.

“I walked into one of my retail stores unexpectedly on a Saturday during the Christmas rush and was shocked by the deplorable appearance of the store, inside and out. Shopping carts were scattered throughout the parking lot. Restrooms were filthy. The front of the store was a disorganized mess. Having been exposed to Systems Thinking, I avoided confronting employees on the spot. (It took everything I could muster to smile and remain calm). However, on Monday morning, I brought the staff together, and we created a checklist to solve the problem. Now, on busy days when normal custodial service isn't adequate, the store workers complete the five-minute cleaning checklist every two hours. The store always looks tip-top, and I don’t have to worry about it anymore.”

An Amazing Plan That Came Together Perfectly

After years of preparation and seven months of space travel, a NASA team successfully landed the robotic rover “Spirit” on the surface of Mars, January 4, 2004. Over time, Spirit accomplished far more than its expected mission and became one of the most successful space projects ever.

The incredible video below is an illustration of what can happen “when a plan comes together”—when a system is designed and executed with such precision that it generates astonishing results.

What We Learn from This Video

You may not have a budget like NASA, but you can create business systems that will cause people to stand up and cheer. (The last scenes of the video could be YOUR customers!)

Like Hannibal Smith, you may occasionally be heard declaring, "I LOVE IT WHEN A PLAN COMES TOGETHER!"

To give back to the entrepreneurial community, I HAVE DECIDED TO GIVE AWAY MY VALUABLE SYSTEMS-BUILDING SOFTWARE, ecOURSE, AND OTHER INFORMATION ABSOLUTELY FREE. By filling out the form on this page, you will go directly to a download page. This is not hype. There is no catch. You will receive a software product and a "college equivalent" eCourse on how to develop effective business systems and processes. Customers have been paying for this software and eCourse for fourteen years (see What Cutomers Are Saying).

You have nothing to lose and everything to gain. I will not be trying to sell you because you are getting everything for FREE, much more than I have described here. I won't be contacting you; however, you can contact me for help with the software or your business at any time. Please browse around my website. If you have any questions, email me, Ron Carroll, at boxtheorygold@gmail.com.

I'll be cheering you on from my quiet fishing hole in the mountains of Utah.

I want to learn how to create remarkable business systems ...

OR, click below to learn more about our Free Software ... 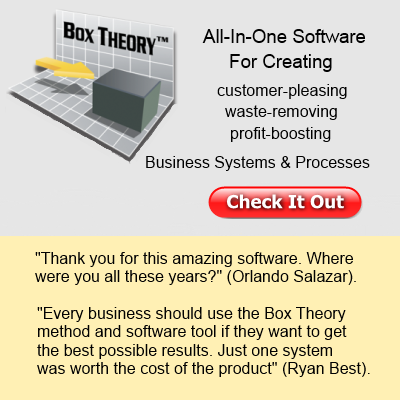