Systems Thinking: What We Can Learn from the Legendary MacGyver!

From 1985 to 1992, there was a popular television character known as MacGyver. He was a secret agent with a scientific background and an unusual knack for solving urgent and often complex problems with simple everyday materials he found lying around. Of course, he was never without his duct tape and a Swiss Army knife. In every episode, MacGyver would jerry-rig a clever contraption to accomplish his purpose and save the day.

Years later, people still refer to MacGyver when using chewing gum, a paper clip, duct tape, or whatever is simple and handy to solve a pressing problem. 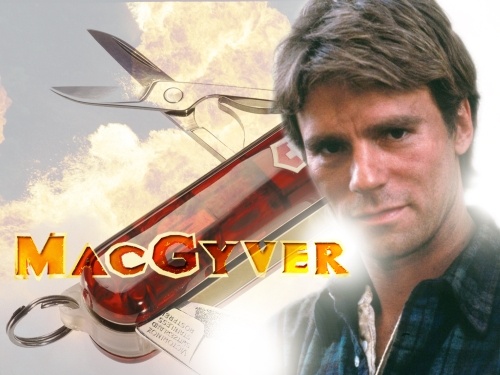 One of my MacGyver moments came when our family moved into a new house that had an unfinished basement. When it began to rain, I was distressed to find water running down one of the inside concrete walls and flooding the basement floor. I grabbed an empty fifty-five-gallon drum left from construction and pushed it against the wall to catch the running water. However, the drum could not sit close enough to prevent the water from running behind it.

I looked around in storage boxes and found an old 16×20 picture with glass in the frame. I removed the glass, set it on top of the barrel rim, and leaned it against the wall. I then applied duct-tape to seal the top edge of the glass and hold it in place. The water cascaded down the wall, hit the glass, and successfully ran into the barrel.  However, within a few hours, the barrel was three-quarters full and too heavy to move… and it was still pouring rain!

From our garden shed, I grabbed an old hose, dropped one end into the bottom of the barrel, and ran the hose out the sliding glass door to a low spot in the backyard. I then sucked on the end of the hose to start a siphon. At that point, the barrel began to empty at about the same rate it was filling. We continued to have torrential rains for three days. However, my little MacGyver water-collection and draining system prevented hundreds of gallons of water from filling the basement.

What Would MacGyver Do?

So, what does this have to do with your business? Keep reading; there’s a message here. But first, let’s look at another example of MacGyver thinking in a business setting.

A toothpaste factory had a problem of sometimes shipping empty boxes—no tube of toothpaste inside. This was due to a minor timing deviation in the mechanical production line that couldn’t easily be controlled in a cost-effective way. Understanding how important it was not to frustrate customers, the company CEO finally decided to hire an engineering company to solve the empty-box problem.

After six months and several hundred thousand dollars, a solution was in place—on-time and under-budget. The problem was solved by using high-tech precision scales that would sound a bell and flash lights whenever a passing toothpaste box weighed less than it should. The production line would automatically stop while a worker walked over, removed the empty box, and pressed the conveyor restart button. Everyone thought the solution was fantastic.

One day, the CEO decided to look at the return on investment of his project. The results were amazing! No empty boxes ever shipped out of the factory after the scales were put in place. Customers were happy, and the problem was solved. “That was money well spent,” he said, before noticing the other data in the report.

To his surprise, the number of defects picked up by the scales after several months of production was zero. “There should have been at least a dozen a day,” he thought. Maybe there was something wrong with the report. After investigating, the information turned out to be correct. The scales really weren’t picking up any defects because all boxes that got to that point in the line had toothpaste tubes in them. There were no empty boxes!

Puzzled, the CEO traveled to the factory and went to the production line where the precision scales were installed.

A few feet before the scale, there was a $20 desk fan blowing any empty boxes off the conveyor belt and into a bin.

“Oh, that,” said a nearby worker, “one of the guys put the fan there because he was tired of walking to the scales every time the bell rang.”

So, what can be learned from these two stories? Here are three takeaways you can apply to your business for better problem solving:

1.     Apply Systems Thinking, a creative—MacGyver-like—approach to business problems. (What would MacGyver do?)

2.     Choose the simplest and least-expensive solution that gets the desired results (Ockham’s razor).

3.     Go see the problem first-hand and get input from workers before undertaking any grandiose or expensive solution (Lean Thinking).

Now, put on your MacGyver hat and go save the day!